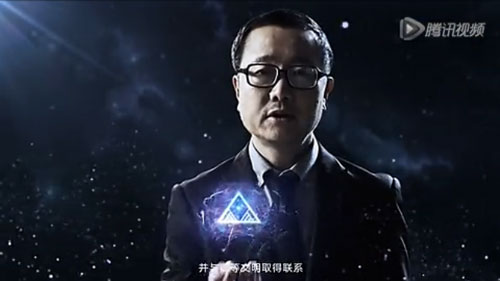 With billions RMB of game revenues in pockets and hundreds of millions gamers in hands, Tencent is now doing something bigger.

On its “UP 2015” product launch on March 30th, Tencent announced it had invited two famous writers to help implement its “Pan-Entertainment” strategy: Nanpai Sanshu (南派三叔) and Liu Cixin (刘慈欣).

Nanpai Sanshu is a popular network novelist famous for his grave robbing series, he will create “world view backgrounds” for a “Super IP” named “Brave Adventure” to be used by PC, mobile and TV games, animations, comics and a movie, and wrote a novel also named “Brave Adventure”; and Liu Cixin is a science fiction author renowned for his masterpiece “The Three-Body Problem”, of which the “Dark Forest Law” is embraced by Chinese internet bosses like Lei Jun, Wang Xiaochuan, etc. He is now hired as “Chief Imagination Architect” by Tencent.

Both writers strove to act positive and confident in cooperation with Tencent. Nanpai Sanshu attended the conference and then posted a weibo saying “Today is ‘Pan-entertainment Adventure Day’…the brand-new super IP (intellectual property) of ‘brave adventure’ is formally released, not just a novel, a cartoon or a game…The new adventure journey has begun, and looking forward to going global”, exactly the same as what Tencent gave journalists, but mentioned nothing else about it. Liu Cixin answered some questions about mobile games from hostess of the launch, but his responses were a bit too empty compared to his works.

For typical IP “Brave Adventure” of “Pan-Entertainment Strategy”, Tencent’s schedule is to release all the content except film (PC, mobile and TV games, novels, animations and comics) before this October and the film next year. The first step has begun, an eye-catching icon of mobile game “Brave Adventure” has appeared in WeChat, and is emphasized as an “innovative work of action shooting”, and of course, just like many other WeChat games, “Brave Adventure” made a wonderful beginning on March 27: first place in “double lists”: “Soaring List” of Tencent’s own channel Myapp and free list of App Store.

However, Tencent’s ambition is a bit too grand from any aspects. Anyhow, it sounds like a mission impossible to create a popular “IP” from zero by and for a series of games, books and movies at the same time and in such a short period.

There have been many doubts about Tencent’s big plan on the internet. “The game of ‘brave adventure’ is just rubbish, not worth for Nanpai Sanshu’s any effort,” wrote a gamer. And a game producer said, “Liu Cixin’s work in Tencent is like inviting Versace’s chief designer to design brands for small commodities from Yiwu.”