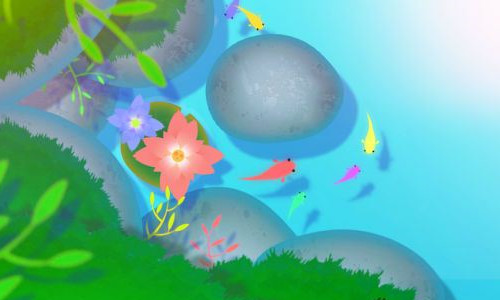 The “indie game” “Carp” (鲤) is surely a big winner of the first Indie Play Carnival, an awarding event for indie games held in Shanghai on July 28th, just before ChinaJoy, as it got the first prize.

The game tells a story about a carp from a stream going through sewers, sewage system and finally entering a big lake called Xinghaihu.

“We firstly planned to adopt traditional Chinese style, but soon we changed our idea, because we want to enter the international market,” said Li Zhe, CEO of Carp’s company – Tianjin-based Duiyou Games, at a forum before the awarding.

Well, above is the “international style” finally adopted by Li Zhe and his team. Will it be accepted by people from different countries? Nobody knows now, because the game hasn’t been completed, just like other games awarded in Indie Play Carnival.

But Li Zhe proudly announced that the game will be sold on PlayStation, apart from App Store.

“Carp” easily reminds me of another game about a fish’s journey – Sumi Zome (墨染). Ironically, this game adopts Chinese style of art, and seems much more impressive and beautiful to me. More importantly, the game is a complete work and has become very popular in China recently. And guess who developed it? A Japanese company: Wright Flyer Studios (affiliated to GREE).

So does that mean the Japanese company didn’t aim for international market? I don’t think so.

Carps in a Chinese painting