13 Years of Accumulation, ChinaJoy 2016 Holds High the “Banner of Pan-Entertainment” 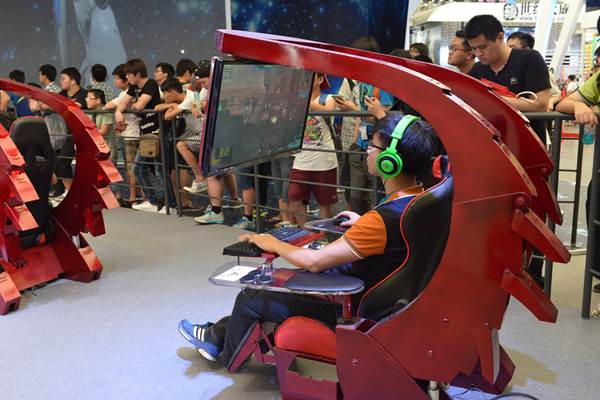 Since 2004 when it met with the players for the first time, each of the ChinaJoy has become a feast of entertainment for China’s game industry, and for 13 years of history, ChinaJoy always grows side by side with the game & entertainment industry. The 14th China Digital Entertainment Expo & Conference (ChinaJoy) will be held through July 28 – 31 in Shanghai. In contrast to the previous events where are purely about game expo and conferences, this ChinaJoy will be diversified in which while games are still dominant, the pan–entertainment digital entertainment elements (including: film, TV, Video, animation, and online literature) will also be additionally covered. As the world’s most influential event for the digital interactive entertainment industry, the theme of ChinaJoy2016 will be also made a gorgeous upgrading, to reflect the thriving of the Pan-entertainment concept in the domestic cultural industry.

In ChinaJoy 2004, there were only 60,000 spectators, 129 exhibitors, and 145 games attending the event, while in 2015, there were more than 270,000 visitors, more than 700 exhibitors, and the 3500 games attending the event. Seeing the games development from client games, to video games and the flourished mobile games……Adapting to times, ChinaJoy has made so much progress in these years, upgrading from the expo that is purely games to the expo which is game-oriented while covering pan-entertainment. In 2016, the fourteenth ChinaJoy will show quite differently.

The Thirteen Years Road to Pan-entertainment of ChinaJoy

From purely a game industry to a pan-entertainment industry that is additionally comprised of film, animation and online literature, it has gone through a long process of development. For the thirteen years, ChinaJoy experienced and witnessed the same and finished a gorgeous turn to the comprehensive pan-entertainment digital entertainment.

In early 2004, the first ChinaJoy was held in Beijing – the capital of China. Different with the famous pure game shows such as E3 in the US, TGS in Japan, and Gamescom in Germany, ChinaJoy from the very beginning contains not only games, but also the comprehensive concepts of entertainment and digital. This also makes the ChinaJoy2016 tracing back to its origin.

Pan-entertainment is an industry model which rose by accompanying the rise of mobile games. Prior to 2011 before the pan-entertainment concept been proposed, the Chinese game industry was in the period of IP incubation. In the era of client games, Shanda is the first Internet Company that began the pan-entertainment layout. Outside of the game business, Shanda has invested or acquired gaming platforms of Haofang, Gametea, and Games ABC, and merged the original literary entertainment portal www.qidian.com. And it has cooperated with 48 leading content providers engaging in a variety of fields that provides adequate resources for its products.

In addition to Tencent, other domestic Internet giants are beginning to realize the central role of pan-entertainment in the game industry chain. In 2014, the 360 and Baidu, as well as the film company Huayi Brothers, all mentioned the “pan-entertainment” advantages and prospects in their speeches at ChinaJoy. Giants’ close attention and layout has stirred up the heat of “pan-entertainment.”

In 2015, the incantation of “Mobile Game’s Winter” was diffused throughout the industry. As the most critical core in the Pan-entertainment strategy, IP is regarded as the last straw to safeguard the industry from collapsing. According to the DataEye’s “Pan-entertainment Industry Report”, among the entire mobile game market last year, IP online games accounted for as high as 41%. Of the IP source, the classic games and their backgrounds accounted for 41%. In the ChinaJoy conferences that last several days, “IP” has become the most high-frequency keyword that is mentioned throughout. Shanda CEO Zhang Yingfeng has highly confirmed the importance of high-end IP on the mobile game market; FeiLiu CEO Ni Xianle expressed at the summit that the future will be the era of IP and fans; and the OURPALM has also announced it will continue to increase investment in the IP layout in 2015.

In ChinaJoy2015, industry giants had conducted great talks centering on the “pan-entertainment opportunities and challenges” as the theme. According to the data published by CMGE chief marketing officer Wang Ke, until now, the mobile games market in China has exceeded the movie box office. How to use the mobile Internet to maximize the commercial value of pan-entertainment digital culture industry chain – this question has inspired new thinking among the industry on the pan-entertainment industry opportunities and challenges. On TOC booth, players also started to notice that game is no longer the only show in ChinaJoy; additionally, they saw 501st Legion of the movie “Star Wars”, cosplay of the anime “One Hundred Thousand Bad Jokes” etc. With games inter-adaptable to animation, video, and online literature, linking all pan-entertainment industry chains together, more and more digital cultures will show on the ChinaJoy Booths in a wide range of multiple forms.

In 2011-2015, the core pan-entertainment industries were at the long-term rise, with the total output increasing from RMB188.8b to RMB422.9 billion, up 22.34 percent CAGR. Among the Pan-entertainment segments, the game industry is the largest, and also expanded quickly, the output value reached RMB140.7 billion in 2015, and the five-year compound growth rate up to 33.3%. Its proportion to the total scale of the industry is also gradually on the rise, to 33% in 2015 from 24% in 2011, and the cash realization capability is also growing.

In addition to the games, animation, film, literature and other pan-entertainment industry chains are also showing of great vitality and productiveness. The market of animation and its derivatives reached RMB113.2 billion in 2015, while the film industry has sped up the growth since 2013 and made RMB44 billion at the box office in 2015. As the bottom and incubation layer, the online literature, although it is relatively small in scale, has realized high outcome in value after subsequent adaptations. Online literature amplified its IP value by its film and animation adaptation. The industry chain that is with games as the main chain to realize its market value has rapidly turned matured between 2011 and 2015. ChinaJoy as the digital entertainment industry platform continues the internal upgrading to reflect the changes in the industry during this period.

The annual ChinaJoy is always an entertainment feast for the game industry, and is also a Happy Camp that the players much-anticipated. ChinaJoy 2015 has attracted over 700 exhibitors and more than 270,000 visitors. The industry is changing, and the game industry has become broader, more diversified, and more responsive /adaptable to the times. ChinaJoy has always threw itself to innovation in the years and made progress step by step, and adapting to times, the upcoming 14th ChinaJoy to be held in July 28 in Shanghai New International Expo Center will also carry the banner of pan-entertainment.

From now on, game is no longer the only cultural expression at the show. Centering on games, a Pan-entertainment industry covering literature, animation, film and peripherals is being formed together. Thus, the 14th ChinaJoy newly added two major thematic display areas of the “Internet Video and Music” and “In-Car Entertainment”. As the wind vane of the industry, ChinaJoy has also been given a new positioning – to create the world’s largest digital entertainment content display platform that is game-oriented, and covers pan-entertainment (including video, animation, online literature).

From the first ChinaJoy 2004 to the 14th ChinaJoy 2016, for the 13 years, ChinaJoy witnessed the development of China’s game industry, and accompanied with the upgrading and adjustment of the industry. Driven by the mass digital entertainment tide, in 2016, the ChinaJoy covering the digital pan-entertainment chain of games, film, animation and network literature and other cultural forms will witness the inauguration of the Pan-entertainment era in China.