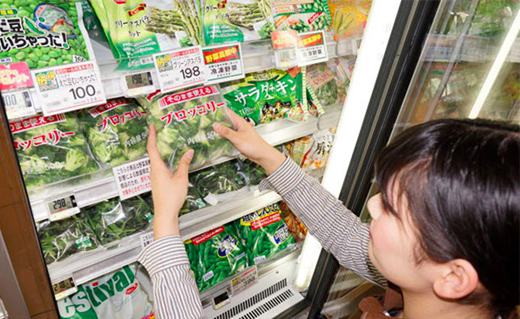 According to data released by the Ministry of Agriculture, Forestry and Fisheries of Japan, imports in 2018 increased by 4% over the previous year to reach 1.05 million tons, which is higher than the record high in 2017 (1.01 million tons), and the growth rate compared with 10 years ago reached 36%.

According to the Nikkei Chinese website, by country, China is Japan’s leading supplier of frozen vegetables, with exports to Japan accounting for nearly half of its total imports, followed by the United States. By category, spinach increased by 14% and broccoli increased by 18% over the previous year. Over the past 10 years, both have achieved more than double the growth.

Chinese agricultural products are improving in the use of pesticides that comply with Japanese standards, and the Japan Frozen Food Association said consumer concerns about safety are waning.

In 2003, Chinese vegetables were left behind due to the problem of frozen spinach pesticide residues, and Japan began to explore other supply sources such as Thailand, Vietnam, and Indonesia. Today, Japan’s imports from China are twice what they were in 2003.

Frozen vegetables are products that are removed from the heat and processed after heating. They have the advantages of easy storage and simple cooking. They help the restaurant industry, which is plagued by labor shortages, simplify the production process and reduce the workload of employees; therefore, its consumption becomes increasingly prominent.

Japanese experts have said in recent years that due to China’s geographical advantages and the stable quality of frozen vegetable products, they can be supplied in large quantities throughout the year, making it difficult for Japan to find the same alternative country. And it is suggested that Chinese companies can develop more high-value-added varieties for products such as hospitals and pension institutions.