If a year ago the industry was hesitant to put all the eggs in one basket, after the “black swan” incident in 2020, it is an indisputable fact that the Chinese market has become the most unmissable key market for global luxury brands.

In its latest report, CCTV Finance cited relevant data and found that under the impact of the COVID-19 pandemic, the global individual luxury market transactions plunged 23% year-on-year in 2020, only the first to recover, Chinese luxury consumption bucked the trend and surged 48% to 346 billion yuan, almost doubling the growth rate of 26% in 2019, triggering widespread concern among the industry and consumers.

The Chinese market also doubled its overall share of the global luxury market, growing from about 11% last year to 20% by 2020. Although the return of luxury spending last year still failed to offset past declines in overseas luxury spending by Chinese tourists, the industry expects China to become the world’s largest market share for luxury goods by 2025.

This comes as no surprise to the industry, as Fitch Ratings retail analyst David Silverman foresaw in a report early in the pandemic that “once the pandemic passes, Chinese consumer travel will soon return to normal and consumer purchases in China are likely to increase during the period.” He also noted that the outbreak may have a further blow to U.S. retail.

A research report released by investment bank Jefferies in the second half of last year was even more blunt, saying that China is the backbone of the global luxury industry under the pandemic, with Chinese consumers spending a record 80% of global luxury spending in their home market last year, with the return of consumption leading to double- and even triple-digit growth in domestic spending for some luxury brands.

Market analysts Bain expects that the dividend from the return of consumption due to the pandemic will increase the share of luxury consumption in China for a short period of time, but that this share will fall back over the next five years as the global situation returns to normal. 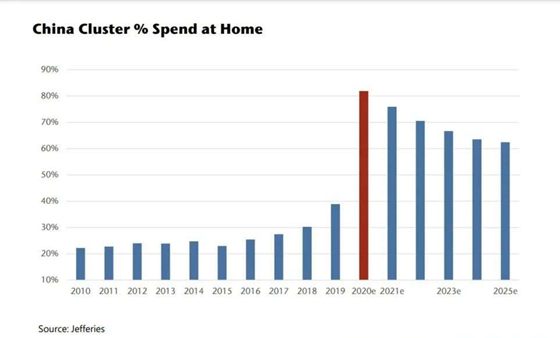 Now, however, it seems unlikely that the global situation of people circulation will return to normality until 2022 or even 2023. Most luxury brands believe that the market within China will continue to grow positively at around 30% in 2021.

It is easy to see that behind all the above figures and expectations, there is a highly concentrated luxury consumption power that has never been seen in the Chinese market, that is, “revenge consumption after the pandemic”.

However, the so-called “retaliatory consumption” usually refers to “explosive consumption after a period of suppression”, which is short-lived and unsustainable, and from April last year to now, there are still long queues in front of major luxury brand stores in China.

According to some analysis, the continuous blowout of Chinese luxury consumption after the recovery of the pandemic is the inevitable result of the overall retail environment, social and economic atmosphere and the strategic layout of luxury brands.

This means that even before the pandemic, the strategic focus of global luxury brands has been tilted towards China, from products to the layout of the channels are getting better and better, major luxury brands such as Louis Vuitton, Dior, Prada, Hermes and Gucci have opened e-commerce services in China, Chanel beauty even landed on Tmall to open a flagship store, the past few years these giants in China The investment made by these giants in the Chinese market over the past few years has laid the foundation for today’s bumper harvest.

The fact that the spending power of the country’s affluent groups has not been significantly weakened by the pandemic crisis is also a reassurance for luxury brands expanding in the Chinese market. According to economic data released by the National Bureau of Statistics of China for the year 2020, GDP in 2020 was 101.59 trillion yuan, an increase of 2.3% over the previous year at comparable prices, the only market in the world to record positive growth, and per capita disposable income of the country’s residents rose 4.7% to 32,189 yuan.

Another report found that the mainstay of China’s luxury consumer base has been taken over by millennials, with Generation Z being the newest rising consumer group. Millennials account for more than 70% of Tmall’s luxury fashion and lifestyle market, while Generation Z, although currently contributing less than 5% of the category’s GMV, is the fastest-growing consumer group, with a year-over-year growth rate of more than 100% last year.

Driven by this group of young consumers, online penetration of luxury sales in China grows from around 13% in 2019 to 23% in 2020. Luxury sales in the online channel grew by about 150% last year. What’s more, e-commerce is no longer just a sales channel in China, but a marketing platform.

With a well-established channel coupled with the purchasing power, Chinese consumers who would already buy luxury goods continue to do so, and the emerging affluent population’s desire for luxury goods is growing, the pandemic has instead become a catalyst for luxury brands to penetrate the Chinese market.

As a result, from Louis Vuitton’s live launch of its new spring collection on Xiaohongshu, to Dior, Fendi and a host of other luxury brands scrambling to get into WeChat video numbers, to launching new collections online, etc., luxury brands have become increasingly decisive in their digital decisions in China over the last year. 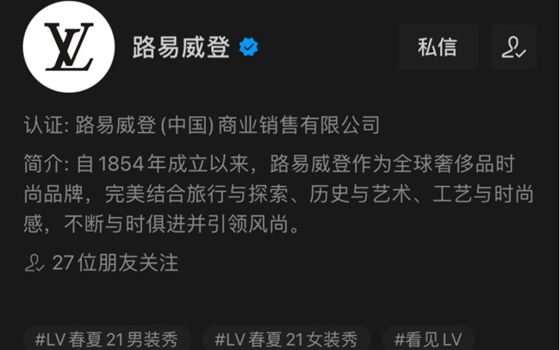 In December last year, Tmall, the country’s largest e-commerce platform, celebrated a milestone moment by coming together with Gucci, once an enemy, in a strategic partnership that will see Gucci offer a full range of products at Tmall, including an official Gucci flagship store covering handbags, leather goods, shoes, ready-to-wear, accessories, watches and jewelry, which opened on December 21 last year, and an official beauty store that opened today. The official beauty store was also opened today, attracting more than 550,000 fans so far.

The ever-cautious Hermès has also come together with Tmall. According to Fashion Business Express, the official flagship store of Hermes perfume on Tmall was officially opened on January 22, and the number of fans quickly soared from 2,000 to more than 30,000 in just two weeks. Some analysts believe that China has become the world’s second-largest cosmetics consumer market, or the most expensive beauty market in the world, and the presence of Tmall, which has 800 million monthly active users, will give Hermes perfume business a strong growth impetus.

What also stimulates Chinese consumers’ desire to buy luxury goods is the unique price increase mechanism of luxury brands. Louis Vuitton has experienced four rounds of price increases in the last year, with the large “On The Go” breaking the 20,000 to 21,000 yuan.

Another core brand of LVMH, Dior’s prices have also continued to rise, after another wave of price increases today, almost the entire line of handbags have stepped into the 20,000 yuan club, where the highest price increase is the small size of the old flower model saddlebag, priced from the previous 25,000 yuan up to 29,000.

Gucci in the last year also repeatedly raised the price of products, a number of 10,000 yuan handbag price has approached 20,000, Prada in the last two years the explosive handbags RE-EDITION 2000 and RE-EDITION 2005 prices have also increased significantly, respectively from 5250 yuan and 8700 yuan to 6000 yuan and 11000 yuan. Salvatore Ferragamo had previously admitted that the group raised the selling price of its products by 5% to 7% after the outbreak to slow down the decline in performance.

The price increase mechanism indirectly encourages people to spend in time, so that “buy early and enjoy early” becomes the choice of consumers. Although many people do not choose to sell their handbags, those who have already purchased them often consider themselves lucky enough to find out that the price has increased and that their decision to spend has been confirmed by the market. This psychological satisfaction will in turn develop them into loyal consumers of the brand.

As for price-sensitive luxury consumers who would previously travel to international markets such as Europe to shop, luxury brands are targeting the duty-free channel on the outlying islands. Duty-free shopping in Hainan’s outlying islands is seen as a new growth engine for China’s luxury market. Price comparisons show that duty-free markups for luxury fashion and lifestyle products in Hainan are 10 to 25 percent better than official Chinese prices. This percentage is as high as 25% to 40% for luxury beauty. 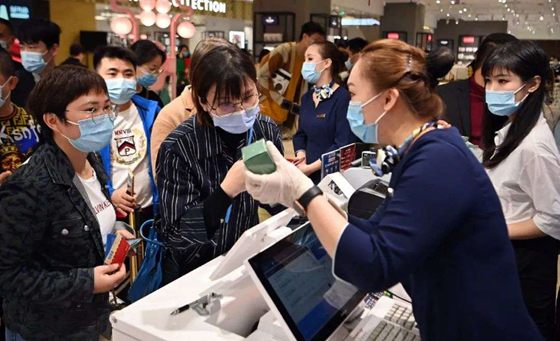 According to Fashion Business Express, Cartier has recently entered the cdf Hainan duty-free official mall, and the second duty-free store of Italian luxury brand Moschino in Sanya will be opened soon. Taking advantage of the new duty-free policy and the dividend from the return of consumption, Moschino will open at least three more duty-free stores in China this year.

While no one can predict whether Chinese consumers’ enthusiasm for luxury will continue in 2021, multiple financial reports show that capturing the Chinese market is the most certain option for luxury brands at the moment.

At the earnings meeting of LVMH, the world’s largest luxury group, the word “China” appeared 20 times, and executives at the meeting repeatedly highlighted the strong rebound in the Chinese market since last April. According to the results, LVMH’s overall revenue in the Asia-Pacific market, excluding Japan, has recorded double-digit growth since the third quarter, and the growth rate in the fourth quarter was further increased to 21% from 13% in the third quarter, boosted by the Chinese market.

Hermes, Gucci’s parent company Kering and Cartier’s parent company Richemont were also beneficiaries of the rebound in Chinese luxury consumption. Among them, Hermès’ business in China resumed strong double-digit growth from the second fiscal quarter, while Richemont’s Cartier revealed that revenue in China alone exceeded the full year of 2019 by the end of November last year, and Kering Group’s sales performance in the Asia-Pacific market, which includes China, resumed double-digit growth in the third fiscal quarter.

In addition, and luxury retailers such as Burberry, Tod’s and Salvatore Ferragamo also saw sales in China accelerate from September last year, all recording double-digit increases. Tiffany’s global sales plunged 40 percent last May, while its performance in China jumped 90 percent.

China’s high-end shopping malls have shown a V-shaped recovery. Shanghai Plaza 66 was one of the best performing high-end malls last year, with revenue jumping 20% to RMB 2.032 billion, mall occupancy at 99% and retail sales up 60%, while Shanghai Grand Gateway 66 also recorded strong growth of 15% to RMB 984 million, with retail sales jumping 42%.

Beijing SKP, which has an area efficiency comparable to Harrods, a luxury department store in the UK, had sales of 17.5 billion yuan last year, achieving double-digit growth of 15% despite the pandemic, continuing the strong growth trend of this phenomenal mall over the past 10 years. SKP Beijing’s new space SKP South SKP-S, which opens at the end of 2019 for a younger clientele, also added to this strong growth.

Also according to results released by Swire Properties, TaiKoo Hui Guangzhou was the strongest performer in the third quarter to the end of September last year, with retail sales jumping 27.3%, making it the best performing mall in southern China. Shenzhen Vientiane City, which brings together a wide range of luxury brands, topped $580 million for its anniversary at the end of December 2020, with 152 stores setting a new all-time high.

Although uncertainty will persist, the main theme of the luxury market until 2021 has basically been written. In the next two to three years, the growth of the global luxury market will continue to be driven by Chinese consumers, with the Chinese market assuming a more important growth role.

Thanks to Chinese consumers, the global landscape of the luxury market is already being rewritten.